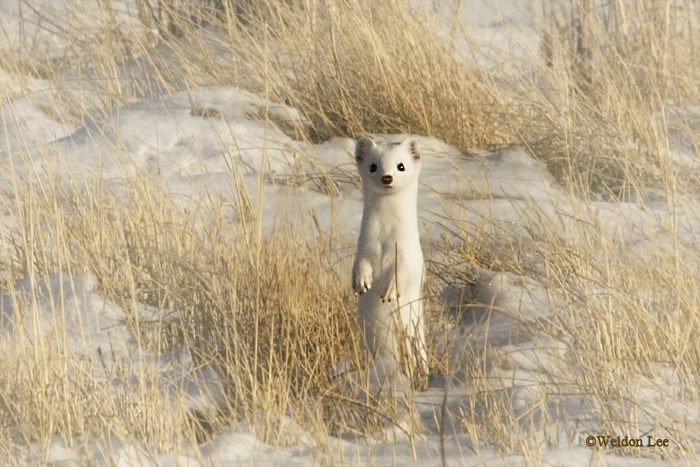 Lori and I had been planning on traveling to western Colorado for over a year to photograph one of the herds of wild horses living in our state. For one reason or another, it never happened. Then, sometime back in October, we began talking about our annual trip to Bosque del Apache to photograph Sandhill Cranes, Snow Geese and anything else that happened to find its way into our viewfinders. Then it came to me, why not travel to western Colorado and see if we couldn’t find the horses. After much discussion, we decided . . . why not? It wasn’t easy giving up a trip to New Mexico, especially since we were unsure if we could even find the horses. After all, they roamed over almost 160,000 acres of BLM land. What the heck. It was worth a try.

It was Friday, the day after Thanksgiving, and we were on our way . . . Lori, myself and our canine family, Diana, Ginger and Cheyenne all packed into our F250 Ford diesel.

Getting somewhat of a late start, we decided to see what we might find in the Arapaho National Wildlife Refuge in North Park near Walden. After all, it would be dark by the time we would be able locate the horses.

Arriving at the Refuge, we decided to drive the Wildlife Loop, hoping that something might pop its head up and give us a photo op. It didn’t happen.

“Let’s go to Refuge headquarters and see if anyone was there,” I suggested. “Maybe they could give us a lead to where we might find something.”

We did, but no one was there – no cars and the doors were locked. Then I noticed something blowing across the field. Was it a bird? No. Perhaps, a piece of trash? No. It was a weasel. It got out of the truck, my newly purchased D500 and trustworthy 80-400mm VR zoom in tow. The photo posted above was the result.

Lori, being cold-natured as she is, stayed in the truck and shot out the window. 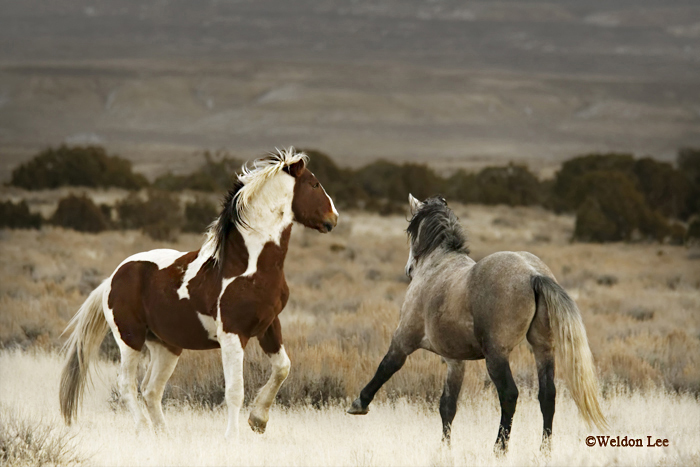 Arriving late in western Colorado, we decided to eat in and enjoy left-over turkey sandwiches for supper. I have to say, Miracle Whip, cayenne pepper and white-meat turkey piled high between a couple of slices of bread is one of my favorites.

The next morning found us in the back country, driving one of the well-maintained back-country roads. (Note: it says well maintained) The reason I point this out is because a sign posted as we left the main highway, read that the roads can be hazardous when they’re wet. Anyway we drove, and drove, and drove looking for wild horses.

I was gonna tell you that we eventually found the horses, but you already knew that. I know. The above photograph was a dead give-away.

Anyway, after a couple of hours, or so, of driving Lori yelled, “Horses!”

Sure enough, she does know a horse when she sees one. All together, we found two small bands along that road, each with three horses. Not many, but at least we had found horses to photograph. Although most of the day was behind us, we really didn’t want to quit.

We had seen another turn-off along the highway not far from our present location. We decided to go there and see what we could find. As it turned out, that was the best decision we made during the entire trip.

Traveling only a few miles along the new road, we spotted a car coming our way. Perhaps they might might have seen horses.  Besides, I always like learning what others are doing. Everyone has a story to tell and I like listening.

As it turned out, the driver was also a photographer.  Her name . . . Nadja Rider. We talked a while and I learned where we might find one of the stallions I had seen posted on the internet. We followed Nadja’s directions and sure enough, there he was . . . just as she had described.

He’s the paint horse in the photo. Thank you, Nadja. While you’re at it, check out Nadja’s offerings. Click HERE.

Anyway, we photographed him and his band until we ran out of light. Perhaps we could find them tomorrow.

Perhaps . . . but it didn’t look good. Snow was forecast during the night.

Sure enough, it was snowing the next morning. Remembering the sign, “Hazardous when wet,” we figured there was no reason to go looking for the horses. We had learned our lesson a couple of months back while tracking down a lead on mountain goats near Breckenridge, Colorado. That lesson cost us $700 for a wrecker to come and pull us out. I may be a slow learner, but I’m not that slow.

Anyway, we decided to enjoy a nice leisurely breakfast in town. Since we still had one more night booked at the motel, we decided, “Lets do the tourist thing.” After all, we were tourists. So, after breakfast, we piled into our truck and decided to do a little sight-seeing. Besides, there was snow on the ground and I always enjoy the snow.

As it so happened, the direction we were traveling would take us past the turnoff that led to the location, where we photographed the paint the day before. More amazing was the fact that, unlike the first 40, or so, miles we had traveled, there was no sign of snow.

There it was. The turnoff. It looked dry. Plus, we could always turn around if if got wet. Fortunately, that wasn’t necessary. Apparently, it hadn’t snowed over-night in this area.

We found the paint and his band within a hundred yards of where we had photographed them the day before.

I had read somewhere, not to get too close to the horses. It went on the say that 50 feet was close enough. That was closer than I needed. However, what Lori and I experienced that day, brought tears to my eyes. One of the stallions that I talked too, actually came towards me where I was standing. So did one of the mares.

Right now, I’ve got to pack.  Lori and I are off to Bosque in a couple of days.

Diana, Ginger and Cheyenne? They’ll be back, too.

You can purchase the photographs on this page.