You are here: Home / Uncategorized / Sammy the Snowy Owl: A Christmas Tale 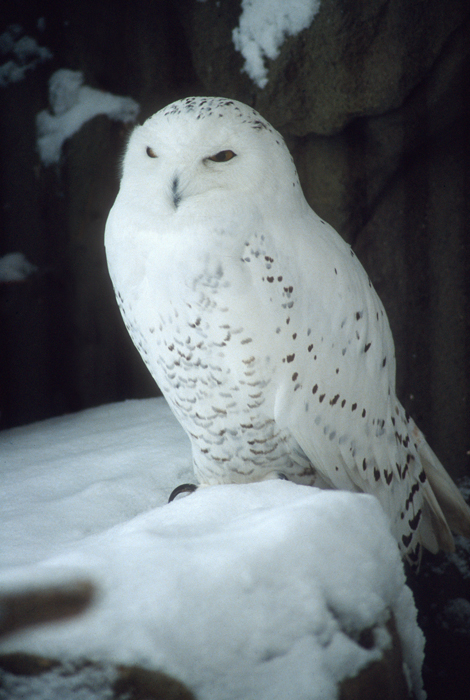 It’s not at all uncommon for boys and girls to shyly inquire whether or not I’m Santa Claus. While I feel flattered to think that I somewhat resemble Santa, I must tell the truth. Although I’m not Santa, I know him quite well and that brings me to the story I’m about to tell . . .

Now, everyone knows Santa’s much too busy getting presents ready for boys and girls around the world before Christmas. So, instead of planning a Christmas Party, he always hosts an After Christmas Party.

Guess what? Last year Santa invited me to attend his After Christmas Party.

I felt really honored, because everybody who is anybody was coming – Buzz Lightyear, the Lion King, Pocahontas, Big Bird, Barney, and of course Rudolph and all the reindeer. Even the Tooth Fairy and the Easter Bunny were invited.  Who was I to turn down such an invitation? Of course I’d come.

Well, when I arrived everyone was laughing and having a good time eating cookies and drinking hot cocoa.

The first one to see me come through the door was Rudolph, so he came over and we started talking. “Rudolph,” I said, “you don’t look very well. You look like you’ve eaten too many cookies?”

“Gummy bears,” I burst out laughing. “Don’t you know any better than to stuff yourself with gummy bears?”

“It all began when we reached Texas,” Rudolph continued.

“At our very first stop, Santa landed his sleigh on little Danny’s rooftop. After placing Danny’s presents under the tree, Santa loaded himself and his bag of toys back into the sleigh. Then he shouted Now, Dasher! now, Dancer! now Prancer and…you know the routine. Anyway, we just sat there. The sleigh wouldn’t budge.”

“No snow,” Rudolph countered. “With a heavy load of toys, the sleigh needs a long takeoff run, or snow on the ground, before it can become airborne. Danny’s rooftop was too small. We needed snow before we could take off.

“Fortunately, Santa had his cell phone, so he called Mrs. Claus and asked her to send Sammy, the Snowy Owl.”

“You don’t know about Sammy?” chuckled Rudolph. “Well, sit down and have a couple of gummy bears, while I tell you the story of how Sammy, the Snowy Owl, got his name. It all began on a cold December night, many years ago . . .

It was the first time there was no snow at the North Pole on Christmas eve. Everyone was worried, including Santa. Without snow, it would be impossible for his fully loaded sleigh to takeoff. How would the children get their presents?

Everyone had gone many days without sleep worrying if it would ever snow. Santa, Mrs. Claus, and all the elves kept their fingers crossed, while me and the other reindeer crossed our hooves, waiting and hoping for the first sign of snow.

Everyone took their turn at the radio, eagerly awaiting each updated weather report . . . still no news of snow.

We all needed sleep, especially Santa and his reindeer. Tomorrow would be Christmas Eve. Even if snow came, without sleep, none of us would be able to stay awake long enough to get all the toys delivered.

The decision was made. Everyone would go to bed.

Sometime during the middle of the night, we were awakened by a strange commotion coming from outside.

Being the youngest, I was frightened. So I called out to Blitzen. He’s the bravest reindeer of all. I asked him to go outside and find out what was making all that noise. I followed closely behind.

By the time we got outside, the others – all dressed in their red robes and fluffy white house shoes – were already there. Everyone was pointing to the top of the building housing the reindeer.

Blitzen called out, “Go away. We’re trying to sleep.”

The owl cried, “I’m an orphan. I don’t have anyplace to go. Can I live at the North Pole with all of you?”

Santa spoke up and said, “OK, but tell us your name.”

“Sammy,”  answered the frightened owl. “My name is Sammy. I’m a hoot owl.”

“OK Sammy,” replied Santa. “You can live with us, but you can’t hoot all night long and keep everyone awake.”

At that point, we all went back to bed – everyone that is, except Sammy. As everybody knows, hoot owls don’t sleep at night.

The next morning when we awoke, everyone rushed to the window to see if it had snowed during the night.

“It’s Christmas Eve,” cried Ryal, one of Santa’s elves. “What are we going to do?”

“We’ve got to come up with a solution,” Santa replied. “Everyone meet me at my workshop the minute you’ve finished breakfast.”

“When I finally arrived, the workshop was full and Santa was talking, “It doesn’t look as though it’s going to snow,” he said. “As all of you know, if there’s no snow on the ground, the reindeer are unable to get my fully loaded my sleigh into the air.”

“How are we going to get all of those toys delivered?” he asked, pointing to shelf-after-shelf stacked with toys. “Does anyone have any ideas?”

Ignoring Sammy, Comet spoke up, “Why don’t we simply add a couple of extra reindeer?”

“That’s a good idea Comet,” acknowledged Santa. “However, only you, Rudolph and my other seven reindeer know how to fly.”

“Could we make two trips?” I asked.

“No Rudolph,” answered Santa. “Unfortunately, there’s not enough time for that.”

Finally, Santa turned to Sammy, “You can make it snow? How?”

“All I have to do is flap my wings,” hooted Sammy. “Here, I’ll show you,” and he began flapping his wings.

“Stop! Stop! Stop!” cried Santa. “Flap you wings outside, but not in my workshop.”

At that point everyone went outside.

Sammy flapped his wings, and within minutes the ground was covered with snow.

Everyone was so excited and happy to see the snow falling, they began singing and dancing.

Santa was especially happy . Thanks to Sammy, boys and girls all over the world would receive their Christmas presents.

Raising his arms and urging everyone to be quiet, Santa shouted, “I have an announcement to make.”

Then he turned to Sammy, “No more will you be called a hoot owl. Because of what you have done today, you will forever be known as Sammy, the Snowy Owl.”

“That’s how Sammy got his name,” blinked Rudolph, “but let me finish my other story. Sammy finally arrived and within minutes we had enough snow to take off from the rooftop of Danny’s house.”

“Wait a minute Rudolph,” you forgot one minor point, I interjected, “What does all this have to do with you eating too many gummy bears?”

“Er, ahh…I was hoping you’d forget about that,” stammered Rudolph.

“You see, Danny’s house was located directly across the street from the gummy bear factory. Knowing that gummy bears are my favorite food – especially the red ones – Jim, the owner, invited me to come over and eat all I wanted while we were waiting for Sammy to arrive.

“Ooooo,” cried Rudolph. “I can’t believe I ate all those jelly beans.”

So boys and girls, whenever the winter snows begin to fall, look out your window. Sammy, the Snowy Owl will not be far away.