You are here: Home / Older Posts / The First Christmas Tree 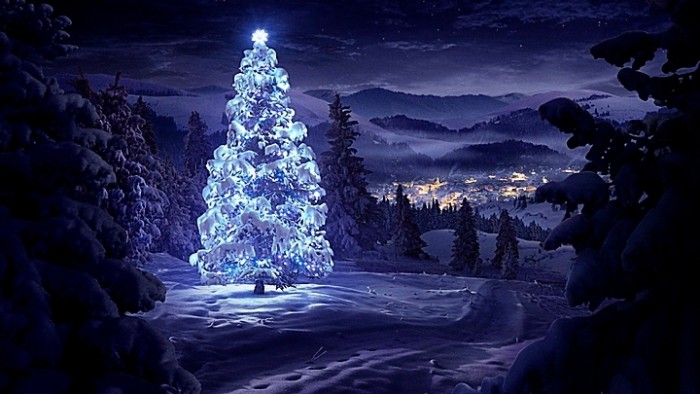 It’s almost Christmas. Santa, his eight tiny reindeer, and Rudolph will soon be making their rounds, bringing joy to boys and girls around the world. As with each Holiday Season, it’s time to share another Christmas story. I wrote this story a number of years ago. It first ran in the Estes Park Trail Gazette, December 20, 2000. I hope you like it.

Gather ‘round as I tell you the story that was passed on to me from someone who was there; someone who actually helped decorate The First Christmas Tree.

It took place long, long ago in an enchanted forest where Santa Claus lived when he was a young boy.

It was the year of the Big Blizzard.

As chance would have it, none of the forest animals were aware that history’s biggest blizzard was only hours away.

Spring and summer had been unusually warm. Food was plentiful. Not wanting to leave the abundant supply of delicacies, the chickadees and siskins had waited much too long before beginning their southward migration.

No sooner had they departed than the worst winter storm ever known to the world overtook them. In no time, the young birds became lost as the howling, wintry blizzard tossed them to and fro. They were unable to even see where they were flying. Guided only by instinct, they headed southward hoping not to crash head-first into one of the jagged mountain peaks reaching skyward.

After hours of fighting the relentless storm, the little birds were tired and completely exhausted. Bruised and hungry, there was no place to land and blinded by falling snow, they could see only inches ahead.

Sensing the bird’s danger, the North Star cast its likeness onto the top of the forest’s tallest spruce tree. The tree became a beacon for all to see, including the small band of lost birds flying southward.

No sooner had the star’s likeness begun to shine atop the towering tree when the birds spotted it. Immediately, they turned towards the light, for it was the first thing they had been able to see since they began their journey some 18 hours earlier.

The dense, swirling snow made flying difficult. However, they eventually made it to the tree. They tried landing, but were immediately swept off the branches by the relentless wind. Again and again they tried, but each time the blizzard winds swept them away. They were exhausted. One last time they would try.

Fortunately, the towering spruce clutched the young birds between the folds of its outer branches. At last, they were safe.

Sensing that the young birds were cold and frightened, the spruce tree wrapped its bows around the shivering birds, but they continued their frightened calls.

Awakened from a deep winter sleep, every spider in the forest came to see what was causing such a commotion. When they arrived, they could see that the young birds were shivering from the cold wind. Immediately, they began spinning webs throughout the tree’s many branches, for they knew their webs would protect the young birds from the howling wind.

In no time at all, the birds stopped shivering. They were warm at last. Even before the last web had been spun, each tiny bird had fallen sound asleep.

Sometime during the night, the storm broke and the clouds gave way to a full moon. Within minutes, its silvery beams had worked their magic, transforming each spider’s web into a sparkling, silver ornament.

Awakened by the sound of the tinkling, silvery webs dancing in the wind, hundreds of fireflies began flocking to the tree. They had come to see what was making such wonderful, musical sounds. When they arrived, they could hardy believe their eyes. Atop the large spruce was the largest, most beautiful star their eight tiny eyes had ever beheld: and its branches . . . every branch was decorated with dazzling, silver spider webs.

They drew closer, but with caution. After all, many of their closest friends had been caught in spider webs. Happy to find that the webs were harmless, the fireflies began flashing their built-in lights. The tree, and the hillside upon which it stood, became transformed into a magical light show as the fireflies luminous bodies changed from blue to white, over and over again.

The ravens flew about spreading the news that their lost friends been found and were safe asleep in the folds of the giant spruce tree.

Knowing the young birds would be hungry when they awoke, the squirrels brought pine cones filled with all kinds of tasty seeds and hung them on the bows of the spruce tree.

The deer brought apples, their favorite food, which they also hung on the tree for everyone’s enjoyment.

A family of beaver that lived in a nearby stream collected red and white sap from a grove of maple trees and fashioned it into candy canes which they hung throughout the tree.

By now, the young birds, safe and rested from their ordeal, began to awaken. They were so surprised and happy when they saw all the food their friends had brought, that they began to sing . .

The coyotes and wolves joined in the chorus with their yipping and howling, while the rabbits shared the warmth of their fur with all who were cold.

Even the bear and mountain lion came in a spirit of playfulness, frolicking about in the soft, powdery snow, making the world’s very first snowman.

It was Christmas morning and peace reigned throughout the forest.

Although many years have passed since my wild brothers and sisters gathered ’round that first Christmas tree, many people to this day decorate living trees with lights and good things for all the animals to eat in honor of what took place the morning of The First Christmas Tree.

“But Pa Pa,” questioned my grandsons, Bret, Lance, Luke, and Dillon. “What about the person that told you this story? You said he helped decorate the tree. What was his name?”

Oh, that was my old friend Snowflake. He was one of the deer who brought apples for all to eat.

Speaking of Snowflake, I think that’s him knocking at my door. Perhaps he brought a basket of apples to decorate the tree outside my cabin. I better go and check it out.

Merry Christmas to all,
and to all, a Good Night!

Photo: “Christmas Tree in the Snow” from Windows 8 Wallpaper