You are here: Home / Older Posts / “Spirit” – The Story Behind the Image” 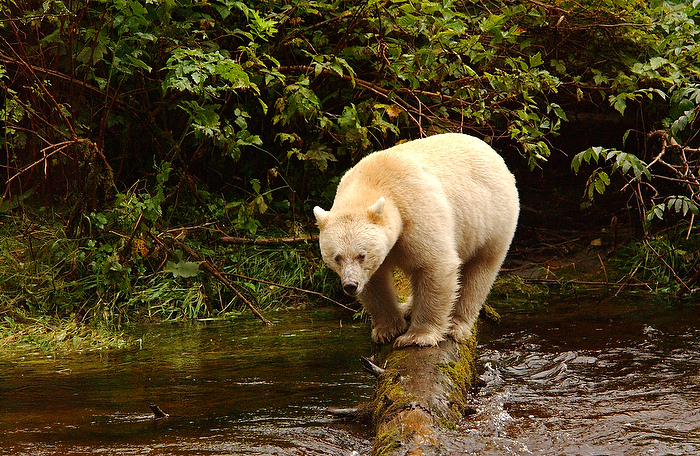 My story begins in Ketchikan, where I hooked up with Sandy Rathborne, Joy Beck, and my longtime friend Rob Haman. We were there to meet Ronn Patterson, another friend of mine who happens to own the Delphinus, a 50-foot power yacht.

I had arranged for Ronn to take my clients and myself to British Columbia’s Princess Royal Island, home of the Spirit Bear, a rare white black bear also called the Kermode.

We spent the night at the Gilmore Hotel, situated in the middle of town directly across the main street from the waterfront where not one, not two, not even three, but five floating behemoths (aka cruise ships) were docked.

The ships were there to off-load their cargo of tourists for a day of shopping in the mixture of gift shops that lined the streets of this Alaskan fishing town. Every nook and cranny was filled with hordes of temporary land-locked travelers, each looking for his, or her, own piece of Alaska to take home – at a discount price of course. The owners of the gift shops were ready and willing to uphold their end of the bargain.

The cruise ships would depart sometime in the middle of the night and head northward for the next tourist stop along the Inside Passage. This progression would be repeated again and again until the ships would finally arrive at their northern-most destination, where they would turn around, head south, and start the process all over again.

Upon awaking the next morning, I was pleased to discover that the cruise ships had departed, along with their paying customers. Thankfully, they departed to the north. The Delphinus, my home for the next week, would travel south.

My group was up early, packed and ready to go. Following a hearty breakfast, we were transported to the Delphinus and a 9 AM departure.

Books describing the beauty found along the coastal areas of Alaska and British Columbia fill libraries. During the past century, photographers have attempted to capture this beauty on film. All, as I would soon discover, had failed.

The morning of the first day found us cruising along the southern boundary of the aptly named Misty Fjords National Monument. Through the mist and fog we could catch glimpses of the glacial valleys that John Muir, during an earlier visit, compared to his beloved Yosemite valley.

Our first night aboard the Delphinus was spent in northern British Columbia, docked along the water-front in Prince Rupert, where we would clear customs the following morning. ‘Til then, we would not be allowed to go ashore.

Fortunately, that didn’t take long. Following a visit to the Museum of Northern British Columbia, and a brief stop at the local grocery for supplies, we were once again underway. Next stop, Princess Royal Island . . . and, hopefully, the opportunity to actually see a Spirit Bear.

The day, we would soon discover, held its own bag of secrets that would be revealed as the Delphinus slipped through the placid waters of incredible grandeur along the Inside Passage, while breathtaking scenery peaked at us from around every bend.

Composed of equal parts granite, water, ancient forests, and silence, it is a wilderness par excellence. Waterfalls dripped from every contour. Rock art in the form of pictographs decorated the faces of rock cliffs along water’s edge. Mist and light rain followed us most of the day.

There was so much to see; so much to photograph. I decided rain or no rain, I would stand on the bow, camera in hand, and capture every gift that Nature presented. Dripping waterfalls. Pictographs. Shearwaters skimming the tops of waves. 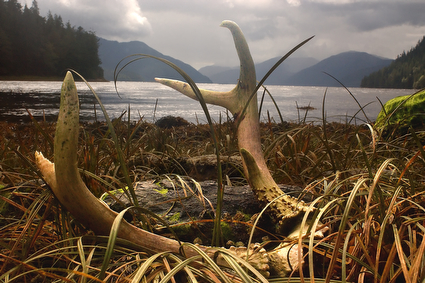 We made several stops that day. One took place on an uninhabited and unnamed island, where I came upon the partial skull of a Sitka blacktail deer, a set of worn antlers still attached. I call the photograph that I made, “A Story Left Behind.” On another island, we came upon the tracks of several wolves. The partially decomposed body of dead whale that had washed ashore had brought them there.

Another location we visited was in a breathtakingly beautiful, protected cove surrounded by huge stands of Stika spruce. It was part of the temperate rainforest that includes Alaska’s 17-million acre Tongass National Forest. The area is remote enough to be home to many species of rare and endangered plants and wildlife. Unfortunately, all was not well. As it turned out, it was the base of a huge logging operation. Dead bodies of trees were stacked upright, end on end. A helicopter was in the process of adding more bodies to the solemn scene.

Day’s end found us within a stone’s throw of a humpback whale, bubble netting next to the rocky out-crop of an island.

Humpbacks, unlike other whales that feed by rapid forward motion, have huge flukes providing greater thrust, along with the flexibility to engage in a series of complex feeding maneuvers called “bubble netting.”

They make it work by swimming in a series of upward spirals, producing seltzer-sized bubbles as they ascend. These bubbles corral and herd prey into smaller and more compact spaces. Then, as the whale approaches the surface, it engages in what is referred too as double-loops. This consists of another upward spiral, followed by a smack of their fluke on the ocean surface, sometimes referred too as a “lobtail,” which is then followed by a second upward lunge, filling their huge filter-feeding mouth with the corralled plankton.

This sequence of tools and targeting of prey by humpbacks has been compared by some scientists to the use of tools by apes in the forest.

It is interesting to note that one study reports that humpback whales work in teams of at least two individuals. Based on my observations that day, this definitely is not always the case.

After spending almost two hours observing and photographing this behavior, it was time to depart for Princess Royal Island, a short distance away. Situated in the heart of British Columbia’s Great Bear Forest, the island just happened to be home to the highest populations of white-phase (they’re not albinos), black bears found anywhere.

Once there, we would drop anchor and spend then night. The next morning would find us ashore in search of Spirit Bear.

It’s no secret . . . I love bears. It matters not the weather, I’m happy as long as I’m in the presence of bears. This is an admirable trait, as I would soon discover, for anyone visiting a temperate rainforest. Believe me when I say, there’s a reason they’re called rainforests.

Nevertheless, there we were, huddled together, along with our equipment, beneath the protective, orange-colored canvas canopy that, to some extent, kept us and our equipment dry as we waited – hour after hour – for a Spirit Bear to appear.

Rushing before us on its journey to the Pacific Ocean was a tannin-tinted, unnamed, mountain stream that had been the nursery to thousands of young salmon fry several years earlier. Now they were returning upstream as adult fish to spawn and begin life’s process all over again. The sounds of jumping fish filled my senses as did their spectacular leaps. Surely, a commotion of this magnitude would arouse the hunger pangs of any self-respecting bear.

Few people have ever heard of a Spirit Bear, let alone ever seen one. As you might conclude, there was no guarantee we would see one of these magnificent creatures. So, we waited . . . and waited.

Finally, after several hours, I heard the sound of cracking branches and rustling leaves. I turned to look but it was only a dead limb crashing to the ground as it gave way to the added weight of falling rain. Another sound soon followed. It had to be a bear. Nothing else could make those sounds. All I could see was a moving shadow. Then it stopped. I waited. Then it appeared.

It was a bear. Not a Spirit Bear, but one of the largest black bears that I have ever seen. Fish were jumping all around him. He focused on a fish; went after it and missed. He tried for another. This time he succeeded. A second bear, also black in color, appeared. It too began chasing salmon.

Fuji stock was going up by the minute as film cameras buzzed with activity. The buffer on my Nikon digital body was struggling to keep up. Then, as soon as the activity had begun, all was quiet. The bears had eaten their share and disappeared into the forest cover. We continued to wait. More blacks came and went. Everyone began wondering if one of the Spirit Bears would ever show itself.

I turned and there it was. The most magnificent sight I had ever witnessed. A real, honest-to-goodness Spirit Bear.

Living up to its name, it appeared like a ghost out of nowhere, as if conjured up by some unseen sorcerer. The magnificent white creature stood along the banks of the fish-swollen stream across from us, looking first one direction and then the next.

And so it went. Nature smiled upon us many times that day and the next. In all, we were gifted with the presence of at least three separate Spirit Bears. Although, it’s possible that a couple of visits could have been from “one-timers,” which would have placed the total number of white bears sighted at five.

The total population of this rare white version of the American black bear was estimated at some fifty individuals during the time of my visit; and, the area we visited is said to have one white-phase bear to every ten black ones. Also interesting is the fact that a black sow can give birth to twins, one black and the other white. The same is true regarding a white sow.

Now you know my story behind the image, “Spirit.” However, I would like to close it with an explanation passed on by the Tsimshiam people, who once lived on the island, which tells how Spirit Bear was first created . . .

“Long ago, the story goes, the world was covered in ice and snow. One day, the raven, the creator of the world, came down from heaven and turned the world green, as it is today. But as a reminder of the time when all was white, the raven went among the bears and turned every tenth one the color of snow. The raven decreed that the white bear, which the Tsimshiam call Moksgm’ol, would live forever in peace.“