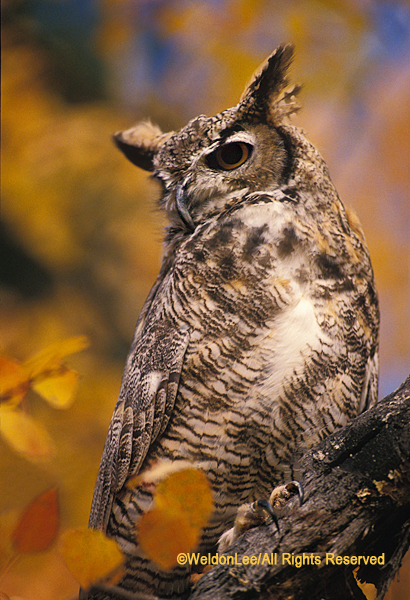 The harvest moon, suspended on invisible threads in the summer sky, cast its spell throughout the mountain valley, while cottonwoods and willows painted abstract patterns on the forest floor. Out of nowhere, a form emerges. No sound . . . only a shadow, barely discernable, mysteriously slipping silently through the labyrinth of riparian woodlands.

Anyone witnessing an episode such as the one I just described would find it difficult to grasp the concept that any animal can be so well adapted to its roll as a night hunter. However, the event described above actually took place.

The Great Horned Owl is one of the most highly specialized and efficient avian predators in North America.

They have the ability to discern objects at light levels one-hundredth of that required for human beings. This is the result of huge numbers of light-sensitive rod cells lining the retina of each eye. Add to this, extremely large pupils that dilate in poor lighting conditions, which in turn allows copious amounts of light to enter each eyes. This combination makes it possible for them to see prey in light levels so low that humans would find it difficult to even see their own hand in front of their face.

Unlike many birds, owl’s eyes are directed forward giving them binocular vision, similar to that of humans. This is important for accurate depth perception and successful hunting.

The surprise attack is essential to night-time hunting. It eliminates the chase and the chance of having dinner escape. To accomplish this, owl’s primary flight feathers are exceptionally soft and velvet-like, thus eliminating audible vibrations.

Phenomenal hearing is undoubtedly a Great Horned Owl’s most unique feature. Their ears, while not the tufts of feathers so prominently displayed on the tops of their heads, are asymmetrical openings on each side of the head . . . the opening on one side located higher than the opposing ear on the other side. This binary hearing is important in pinpointing the source of a particular sound.

Owls are often observed moving their head back and forth, up and down, and from side to side. This, along with their excellent vision, is how they are able to locate the faintest of sounds. On a dark night in the forest after executing this routine, they wind up directly facing their prey, ready for the strike.

Another aid to hearing that Great Horned Owls posses is a ruff of highly specialized feathers encircling their face. These feathers can be raised or lowered at will and are used to funnel sounds into their ear, much as when a person cups a hand behing an ear to hear better.

A Great Horned Owl’s adaptations for night hunting does not end there. Their large taloned feet, spread out for the attack, compensate for even the smallest error in vision or hearing. Even the facial “whiskers” extending beyond its beak aid in orientation for better contact with their dinner.

Tony Angell in his book “Owls” writes, “A night-time forest which reveals little to a human observer is to the owl a community alive with moving forms and at times a chorus of chatterings, clicks, squeaks, and whines.”

From the placement of ears, to the design of their eyes and wing feathers, Great Horned Owls are a marvel of evolution and natural selection.