You are here: Home / Older Posts / Santa Claus – How It All Began 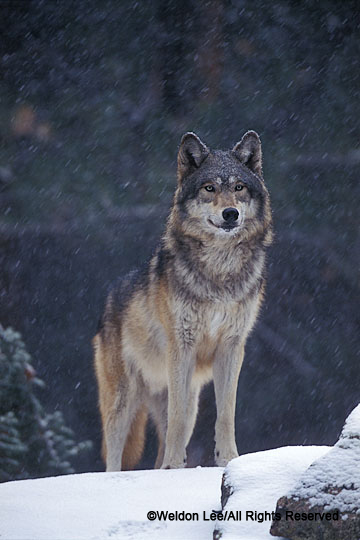 Although Christmas is right around the corner and Santa will soon be making his rounds bringing joy to boys and girls around the world, few people know the story of how is all began.

Gather ‘round as I share the story that was passed along to me from one of my friends – someone that was actually there when it all began . . .

Many years had passed since the season of the First Christmas Tree. Decorating the giant spruce had become an annual celebration among the animals of the forest.

Year after year Spider would spin her silvery web throughout the tree’s many branches, while Firefly and his friends provided the light show as they flashed their luminous built-in lights from blue to white to blue again. Squirrel always brought pine cones filled with a variety of tasty seeds, while Deer hung shiny red apples picked in the nearby orchard.

Beaver and his friends would collect the red and white sap from maple trees and fashion it into candy canes. There was always a contest to see who could hang the most candy canes.

Every bird would sing its own unique song. Coyote and Wolf always joined together in harmony on the chorus with their yipping and howling.

Bear and Mountain Lion loved making snow creations. One year they created the world’s very first snowman. Another year they made a snow bear. Their funniest creation – an elephant with two trunks – occurred the year that River Otter joined the clan.

No one loved frolicking in the soft, powdery snow more than River Otter. Unfortunately, he was not as skillful as Bear and Mountain Lion when it came to making snow creations.

Each and every Christmas Eve, Moon’s magical, silvery beams would transform the spider webs into tinkling, silvery ornaments.

North Star never failed to cast its likeness atop the giant tree.

Year after year the animals would come from far and wide to join the celebration. Elephants and lions and tigers and hippopotamuses would come from Africa; kangaroos and koalas from Australia; penguins from Antarctica; polar bears, wolves and caribou from North America; pandas from Asia; jaguars and monkeys from South America; red deer from Europe; every continent and species was represented.

One Christmas Eve when all the animals had gathered ‘round the Christmas Tree, Bear came up with an idea. This was not unsual for he was very imaginative.

“For many years,” Bear proclaimed, his words reverberating throughout the forest, “we’ve been blessed with the beauty of this mighty tree at Christmas-time. Let us share the joy and happiness of the Season that we’ve experienced with people throughout the world.

Shouts of joy went up from the animals because everyone agreed with Bear.

“Go to your homes,” Bear admonished his friends. “There are many trees to decorate and much work to be done. Just make sure you return before the sun’s first rays touch the top of the mountain.

“A major snow storm is brewing at the North Pole,” he continued. “and it’s expected to reach here shortly after daybreak. I don’t want anyone harmed by its fury.”

The animals were delighted and could hardy wait to share their joy with the others.

Roo immediately headed for Australia where he would be in charge of hanging ornaments on Eucalyptus. Ephelant returned to Africa to oversee the decoration of Acacia Tree. Pen Gwen on the other hand, would supervise decorating the Giant Iceberg since not a single tree grew in Antarctica.

People that celebrated Kwanzaa would be treated to the lighting of the seven candles, or mishumaa as it is called, while those that observed Hanukkah would enjoy The Festival of Lights, the lighting of the menorah. People honoring Rhamadan would be treated to the lights and decorations of Eid al-Fitr which ended their month of fasting, and those who looked to Christmas would celebrate the birth of Jesus.

Thanks to the animals, every person on every continent celebrated the Season according to their own beliefs and in their own special way.

Once the animals had completed their tasks, it was time to begin the long trek back to the First Christmas Tree. Many traveled with friends while some made the journey alone.

Unfortunately, the snow storm that had been predicted to reach the area surrounding the First Christmas Tree sometime after daybreak was ahead of schedule.

Two feet of snow had already fallen and more was expected. Travel in the powdery snow was slow and tedious. More importantly, temperatures were dropping rapidly and the wind was blowing near gale-force velocity.

No longer was it everyone’s goal to reach the First Christmas Tree by daybreak. It was fast becoming a matter of survival.

North Star, in anticipation of the approaching storm, had cast its likeness upon the First Christmas Tree. The shinning star resting atop the tall tree once again became a beacon for every animal as it showed them the way to safety.

The animals that traveled together were not in as much danger as those that traveled alone. By nuzzling close to one another, it was possible for even two animals to keep warm as they trudged toward the shinning star.

Raven knew the real danger was to those that traveled alone. Ignoring his own safety, he flew out in search of them. Within a short tme, he had located and sent help to every animal; everyone except Wolf.

Wolf normally traveled in a pack with the other members of his family; but not tonight; this time he was alone. This time . . . he was lost.

It was morning before the other animals made it back to the First Christmas Tree. The absence of Wolf weighed heavily upon everyone. Over the years, Wolf had become their friend. This morning . . . he was gone.

Although it was Christmas morning, no one felt like celebrating. Instead, all the animals were quiet. Their thoughts were focused on their missing friend.

It sounded like the wind, but it was different.

There it was again.

Everyone rushed to see where the sound was coming from. They couldn’t believe their eyes.

It was Wolf; and he was with someone. A person. A real, live, human being. No human had ever set foot in these mountains. Only the animals knew about the giant spruce tree.

Had this person – whoever he was – placed Wolf in danger?

As Wolf drew closer, they could make out that the person was neither man, nor woman.

It was a boy; a very small boy.

All the animals were happy to see Wolf, especially when they saw that he was safe and no longer in danger. Crowding around him, they were anxious to hear how he found the young boy.

Wolf explained that he found the boy laying unconscious in the snow. Almost frozen, the little boy was barely breathing. Wolf had held the lifeless body close to his own for hours before the little boy showed any sign of life.

Having heard Wolf’s story, the animals turned their attention to the boy.

But where was he? In their excitement to hear Wolf’s story, they had completely forgotten about the boy.

Had he run away?

In no time, however, they found him.

The small boy was practically hidden by one of the branches of the giant Christmas Tree. It appeared that he was fashioning a toy animal out of a piece of wood.

Bear welcomed the small boy to his clan. After sharing milk and cookies, Bear told him the story of the First Christmas Tree.

The boy was almost asleep by the time Bear finished the story.

“What’s your name and from where do you come?” asked the other animals, anxious to know before he nodded off to sleep.

“I come from the forest,” he replied.

Thanks to Wolf and all the animals, that’s how the story of Santa Claus began. Some day, boys and girls around the world would receive toys at Christmas time; but that day was yet to come.

As for the friend that shared this story with me – his name is Wolf.

HAPPY HOLIDAYS TO ALL, INCLUDING MY WILD BROTHERS AND SISTERS.