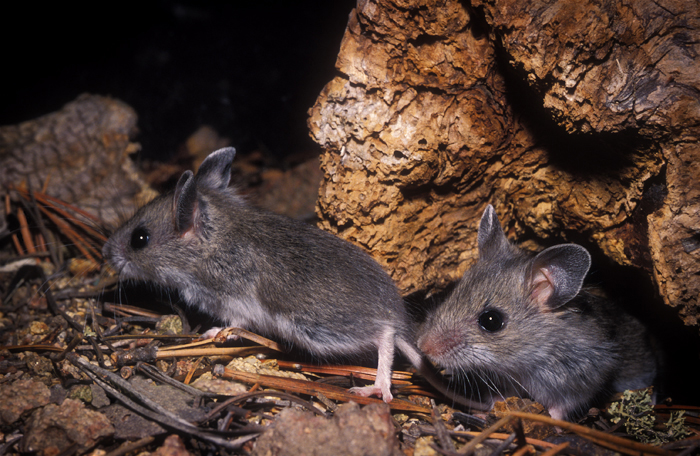 Luke and Dillon Deermouse leaving for the North Pole to help Santa.

‘Twas the night before Christmas, when all through the house, not a creature was stirring, not even a mouse . . .”

“Gran Pa Lee,” interrupted Bret, my youngest grandson, “what happened to the mice?” My other grandsons – Lance, Luke and Dillon – were also awaiting my response.

“They were all sound asleep,” I explained.

“Why were they sleeping, Pa Pa?” asked Dillon.

Gather ‘round and I’ll tell you the story.

It happened a long, long time ago when I was a young boy, just about your age, Lance.

It was the same year that Santa’s reindeer went on strike and refused to fly.

It was Christmas Eve.

Winter had been unusually cold. The snow was so deep you could barely see Rudolph’s red nose as he trudged across Cherry Plum Meadow on his way to the Chocolate Factory.

Santa’s helpers were busy loading his sleigh with toys for boys and girls around the world. Teddy bears, dolls, wind-up cars, and toy trains covered the loading platform.

“What are you talking about?” asked Ryal, Santa’s helper in charge of sleigh loading.

“Santa’s reindeer refuse to fly,” she cried. “What are we going to do?”

Aaleeka had taken care of the reindeer since she was a little girl. She loved them and they loved her. Never before had they refused to fly.

“Oh my goodness,” proclaimed Ryal. “We must do something! You must go and tell Santa.”

“I’m… I’m on my way,” she said, rushing to the Weather Station where Santa was busy checking snow advisories around the world. He always did this before delivering toys on Christmas Eve.

“Slow down, Aaleeka, slow down.”

“Santa, the reindeer refuse to fly,” she finally managed to get the words out of her mouth. ”They won’t even come into the stable. What are we going to do?”

“We’ll just have to find a solution,” explained Santa. “What seems to be the problem?”

“It’s all that deep snow,” answered Aaleeka. “The wheat fields are covered with snow. The reindeer can’t get to the grain.”

“I thought we had enough hay stored in the barn to feed all the animals?” queried Santa.

“We do,” explained Aaleeka, “but the reindeer won’t eat it. They want fresh grain.”

“Have all my helpers meet me in the Conference Room,” ordered Santa. “We must put our heads together and come up with a solution.”

In the Conference Room meeting . . .

Santa explained the problem to everyone.

Ord was the first to offer a solution. “Santa, I’ll go talk with the bluebirds and cardinals. They eat lots of seed and grain. I’ll ask them to help. They can fly to where there’s no snow and gather all the grain we need.”

“All right Ord,” replied Santa, “but please hurry. We don’t have much time.”

Minutes later, Ord returned, out of breath and his head hung low. “I couldn’t find any birds, Santa. Even the snow birds are gone. They’ve all flown south to escape the cold winter winds.”

“If we can’t find any grain,” suggested Oleea, “maybe we can get some berries. The reindeer love blue berries, especially Rudolph. I’ll go and ask the bears to help. They know where every berry bush is located.”

If anyone could get the bears to help, it was Oleea. She loved the bears very much. Every spring, she helped the mamma bears protect their newborn cubs.

“Hurry as fast as you can, Oleea,” begged Santa. “Time is running out.”

It wasn’t long before Oleea was back. Unfortunately, her report was no better than Ord’s.

“All the bears were sound asleep,” she explained, tears in her eyes. “I couldn’t wake them up. All they did was lay there and snore.”

“Santa, I’ve got an idea;” Moonbeam cheerfully announced. “I think we can solve two problems at the same time.”

If anyone could help, it was Moonbeam. Like all Butterfly Fairies, she always carried a special pouch strapped to her waist. Whenever she wanted to cast a spell, she simply reached into the pouch for a handful of star dust and sprinkled it everywhere. Thanks to her, Santa’s Workshop always had more than enough toys to meet the ever growing demand. That’s not all. It was Moonbeam who taught Rudolph how to fly.

“Exactly!” replied Moonbeam. “No one knows any better than you, Santa, the difficulty in delivering presents on Christmas Eve and having to wait until every boy and girl is in their bed and sound asleep.”

She added, “Do you remember the year when little Jimmy Boyce stayed awake so late that you almost didn’t make it to everyone’s house.”

“Do I ever,” sighed Santa. “I didn’t think he would ever go to sleep. However, it really wasn’t his fault. It was all those mice scurrying about that kept him awake.”

“That’s the problem with mice on Christmas Eve,” explained Moonbeam. “I like mice, but they make a lot of noise eating all the cookies the boys and girls leave for you.”

“So that’s what has been happening to my cookies,” said Santa, surprised. “And all this time I thought it was Rudolph.”

“I’ll gather all the mice together, Santa,” replied Moonbeam. “It’ll be easy. They don’t migrate like the birds, or hibernate like the bears; and, since they also eat grain, they’ll know where to locate enough for all the reindeer. Plus, if we put them to work on Christmas Eve, they won’t be around to keep all the boys and girls awake.”

“Don’t forget, Moonbeam.” chuckled Santa. “Another benefit will be cookies without holes nibbled by the mice.”

Moonbeam reached into her pouch and came out with a handful of star dust which she immediately sprinkled around the world.

Santa explained the situation. “We need fresh grain for the reindeer, guys. Without it, they won’t fly; and if that happens, I’ll not be able to deliver toys to the boys and girls around the world. It’s up to all of you.”

Santa heard a couple of mice talking among themselves. “Speak up,” he ordered. “What are your names?”

“I’m Dillon,” squeaked the largest mouse, “and this is my cousin Luke. We know a secret location where grain fields are ripe year ’round.”

“Good,” replied Santa. “Lead the others to your secret location, but hurry. If I don’t leave by midnight, there’ll not be enough time to visit the house of all the boys and girls.”

“You heard him, mice,” squeaked Dillon and Luke. “We’ve got work to do.”

In no time at all, the mice returned with enough grain to fill the entire stable.

Needless to say, the reindeer were happy and eager to begin their Christmas Eve journey.

The next morning when Santa returned from delivering toys, every mouse was sound asleep. They had worked so hard gathering grain, they were too tired to even return home.

When they finally woke up, Santa gathered them all together. “Thank you one and all,” he shouted.

“Last night was so successful,” he proclaimed, “from this year forward, every mouse in the entire world is invited to join us at the North Pole on Christmas Eve.”

Speaking to Luke and Dillon, he added, “Because you shared the location of your secret grain field, you and your cousins will all be known as Deer Mice from this time forward.”

“Moonbeam,” he continued, “thank you for making it all happen. Because of you, every boy and girl was sound asleep and not even a mouse was stirring.”

And that, Bret and Dillon, is why mice always sleep on Christmas Eve.