The following notes are taken from my journal. It’s a record of my observations and the feelings I sensed in my spirit during a trip to Nebraska’s Platte River Valley, back in 1994, to photograph Sandhill Cranes. The trip took place within a few days of the actual day of this posting, albeit 21 years earlier. At the time, if memory serves me correctly, I was living in Wild Basin (more about that in another story) in a log cabin built around 1895. It was (and still is) located about a half mile from the southeast entrance to Rocky Mountain National Park.

Friday, March 25. Departed Allenspark at 9:15 AM. Blue skies overhead, low clouds hang over Longs Peaks. It snowed 4 inches sometime during the night. The mountains and trees are clothed in a blanket of white.

Note: The image posted above, “Sandhill Fantasy,” was actually made from the Minden Bridge during this trip.

Saturday, March 26. A full moon hovers just above the western horizon. It’s so bright, shadows follow me as I walk to the blind. A Killdeer stirs and calls alarm. I’m in my blind by 4:30 a.m. (with a group of people, it would be better to be in the blind by 4:15). At 4:45 a.m., a rosy halo appears in the eastern sky. Only a few streaks of clouds are visible. Should be clear today. A layer of frost coats the remnant alfalfa stalks.

The wind blows, causing the wires that secure the blind to the ground to rattle. I feel as well as hear a slight “whooshing” as it engulfs the blind. Although I’m almost a mile and a half from the Platte River, I can hear the cranes. They’re discussing their plans for the day.

I can see why some people refer to the moon as being made of cheese. Hanging just Inches above the horizon, it’s neither white nor yellow. In contrast with the blue night sky, the moon is a vibrant ivory ball.

It’s now 6 o’clock and getting brighter in the east. Still not full daylight, but I can make out details just outside the blind – trees in the distance and farm equipment parked along the edge of the nearby cornfield.

The sound of cranes along the river is increasing.

There’s a real sense of peace being in a blind on a morning like this – frost coming from my breath as I take my first sip of morning coffee. Maybe it’s more a sense of contentment, or just satisfaction.

I’m trying out my catalytic heater for the first time. It’s doing a good job of providing heat.

My senses are alive this morning – the smell of the coffee as it steams out of the cup; the pungent odor emanating from the heater burning white gas.

The wind is increasing. New sounds emerge as it blows around and through the blind. 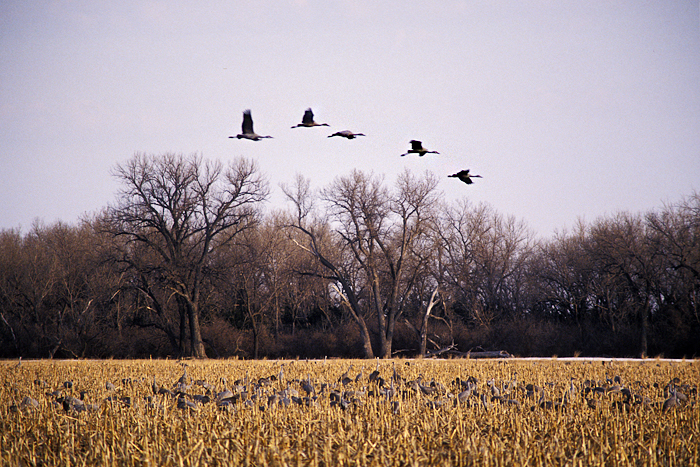 Cranes feeding in the corn field.

Activity along the river appears to be increasing as the sounds become louder. More birds join the morning chorus at this time.

The sound of a distant airplane breaks my concentration. Where could it be taking it’s precious cargo?

Here comes a group of four cranes. Suddenly, the group is joined by others as they fly overhead – 10 to 20 birds altogether.

The first flock of the day.

The morning wind is competing with the birds for attention. As the sounds of cranes increases, so does the sounds made by the wind.

I pick out the voice of another crane as it goes overhead.

Several hundred yards away, I see three cranes heading southeast from the river.

Three more fly overhead. Although they’re facing the southwest, the wind is carrying them to the south.

The sounds grow louder along the river.

It’s 6:15 a.m. Another group flies past . . . four, five, six, seven birds. Following them, another group makes its way to the south; five birds in it.

A small group in the distance. Another ten birds.

Here comes a group hugging the ground as the wing their way past the blind – 15, 20 birds. Another group going overhead. It looks as if they want to land nearby. Fifteen or 20 more, going overhead now. Thirty birds split into 4 more groups as they approach from the east. 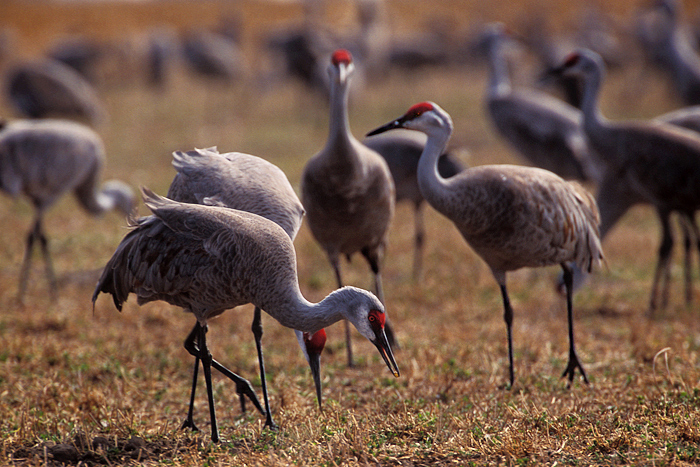 A crane and a kernel of corn.

No wonder their ‘rattling’ call sounds so primeval. They’ve been around some 14 million years. I close my eyes and attempt to imagine these same sounds as their ancestors flew over this area a million years ago.

They’re wary. They don’t trust humans. Maybe that’s one of the reasons they’ve been around for so long.

Traveling great distances from their wintering grounds in New Mexico and the Texas Gulf Coast, they must gain a pound and a half before continuing northward where they will breed in Canada and the Northwest Territories.

Everywhere I look, I see birds. The sky is filled with birds.   Sounds . . . They’re landing in the cornfield by me right now.   Sounds . . .   A flock just landed, no more than 75 feet from my blind. Ten more birds come to join them. Dropping their landing gear, legs dangle as they glide in for a landing. Graceful flyers, they appear gaulky as their landing gear deploys. Nevertheless, landings are skillful and graceful as they flap their wings at the very last moment.

Between four hundred and five hundred birds feed just outside my blind.

They’ve transformed themselves into a cloud obliterating the sky.

The wind is like an organism. A living, breathing entity. Taking on various personalities at its own whim. Sometimes a calm soothing personality. Other times a personality full of rage and fury, and at other times, completely peaceful – still, hardly moving.

Could cranes be like fishermen? When one fisherman anchors his boat and begins casting into the water, others observe and assume he is catching fish. So they come to join him. Then another boat arrives . . . and another.

I think cranes might be like fishermen. A few cranes land in a grain field. Others flying overhead see them, and think . . . ahh, our friends are eating all the grain. “Let’s join them.” Others follow. Before you know it, a large flock has gathered – hundreds, perhaps thousands of birds. Others see the huge congregation and think, “Ahh, that must be good,” and they, too, land.

Or, maybe fisherman are like cranes. Who knows? Who came first – the chicken, or the egg? The fisherman, or the crane?

To illustrate what I’m referring too, six birds just landed and began feeding. Soon two more joined in. Then another two birds. Then a group of three. Then six. Then another. Twenty birds! Before you know it, the group has grown to 80 birds. Cranes must be good at math, the flock is now growing exponentially.

They always seem to stand and walk into the wind. Maybe it’s so they can take-off into the wind should a predator appear from out of nowhere. Or maybe, just maybe, they don’t like the wind whistling up their rear end.

And that brings me to the end (pun intended) of this post. 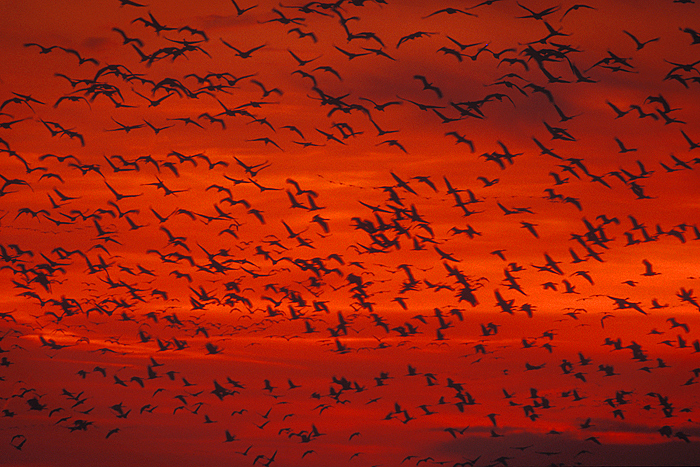