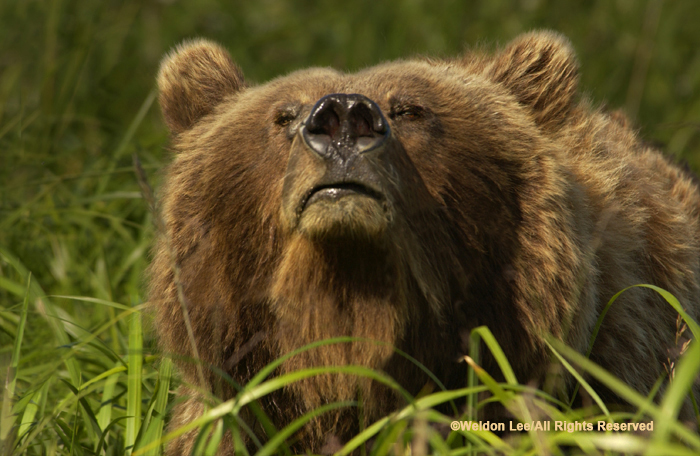 People are often surprised when they see one of my bear photographs for the first time. Their typical response goes something like this, “Did you really get that close?”

They are even more surprised with I tell them, “Not only did I get that close, but it’s not uncommon for me to get even closer.”

Following a brief gasp, they typically ask,”Weren’t you afraid?”

By the time I tell them, “No! I talk “bear talk,” I definitely have their attention.

It’s true, I have learned to talk “bear talk.”

I’ve even been know to talk “moose talk.” Although one day last fall, while communicating with a large bull moose, there was a moment or two when I wasn’t sure he heard me correctly.

At this point, I’m confident that I have your attention, too. So, follow along and I’ll explain. 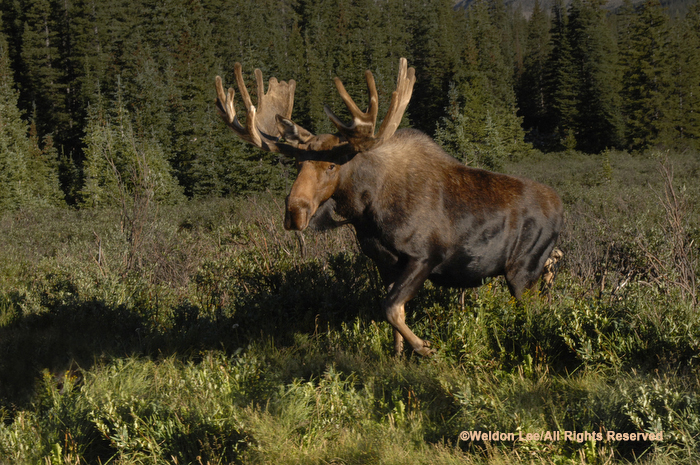 This bull moose was standing 15-feet away and looking me directly in the eye, less than two minutes after this photograph was taken. Fortunately, I understand the language of “Moose Talk.”

Learning “bear talk” is not difficult. All it takes is an open mind, observation, and lots of patience. The same techniques apply if you want to learn how to communicate with other species, and that includes birds, although the later can sometimes present more of a challenge.

In general, communication in nature involves the use of the five senses – sight, hearing, taste, smell and touch. However, the ones I typically focus on are sight (body language) and hearing (purring, grunts, jaw snapping, etc).

There’s also telepathy. It’s my opinion that many members of the animal kingdom also communicate via telephaty, a method lost to humans thousands of millennia ago. It may even rank higher among our wild brothers and sisters than other forms of communication.

By now, you probably think I’ve gone off the “deep end.” However, if you remember one of the things I mentioned earlier that was nescessary for learning bear talk, was an open mind. Now’s the time for that open mind.

It’s important to understand that animals communicate in much the same manner as humans – verbally and with body language.

Verbal communication tops the list as far as humans are concerned. However, we often overlook the fact, allbeit subconsciensly, that body language, including facial expressions, also plays a major role in human communication.

On the other hand, body language is number one among the majority of our mammalian wild brothers and sisters. Having said that, research indicates that verbal communication is just as important, and perhaps more so, for certain species.

As for our avian relatives, not unlike humans, they too rely primarily on verbal communication.

Last year as Lori and I were conducting workshop in Rocky Mountain National Park, a Black-billed Magpie landed on the rear view window of our truck just outside the driver’s window. It sat there a good five minutes listending to every word I utterred, telling him what a handsome bird he was and how I was his friend and that he could trust me. 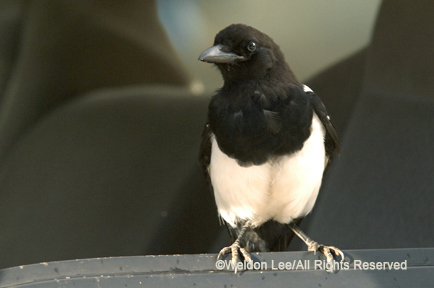 When you’re in the field, don’t forget that communication is a two-way avenue.

In addition to the animals communicating certain facts to us, we are, at the same time, sharing information with them.

This primarily happens through our body language.

We need to remember that many species are specialists when it comes to body language. For those species, it’s their primary language. They completely understand everything we say through our body language.

Make sure what you are telling them is not the wrong message.

That’s not all. This is where telephathy enters the picture. How many times have you gone outdoors to commune with nature with a troubled spirit, or perhaps joined by someone in a state of anger and no animals were to be seen. The woodland was quiet. No birds were singing. Not even the sound of a squirrel broke the silience.

I don’t know about you, but I have personally witnessed events such as the one described above. Our wild brothers and sisters pick up on negativity in a heartbeat and react accordingly.

Wild animals will let us know, sometimes verbally, and almost always by their body language of how we need to act in their presence. It then becomes our responsibility to understand and act accordingly.

A member of the deer family, for instance, may suddenly raise its ears to the alert position. This is a message to stop whatever you are doing.

Perhaps, you are working a bear and it yawns. This is not a sign that it’s tired, sleepy and looking for a place to take a nap. This is a warning to stay where you are and approach no closer.

Maybe your subject is a bison bull and all of a sudden he rolls it’s eyes back and raises his tail. He’s about to do one of two things . . . charge, or discharge. In either case, you do not want to be nearby.

This list goes on. The way you learn these behaviors comes through patience and observation. 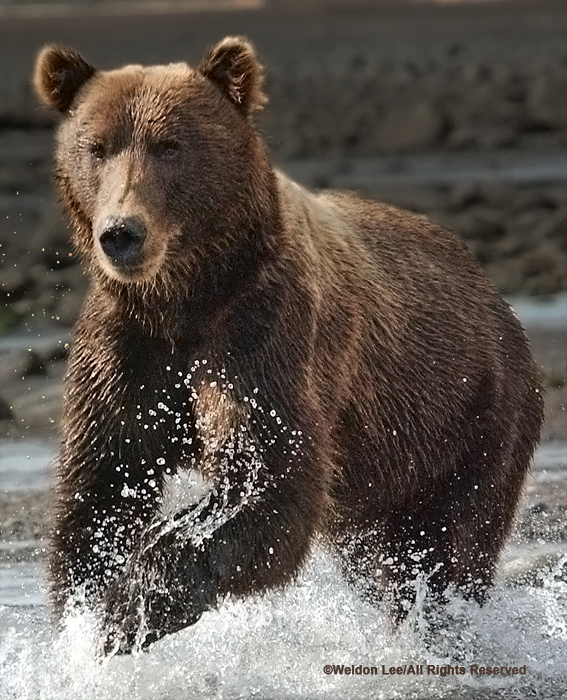 Up close and personal with a brown bear salmon fishing in Alaska.

The number one reason animals attack people is simply because they do not trust us. They’re frightened and want to protect themselves and/or their offspring. The other reason, which can happen, but is extremely rare . . . they consider humans to be a food source and they’re hungry.

Fortunately, their behavior and actions will communicate their intentions, be they good or bad.           Do we understand what they are telling us? In some cases, our life may depend on complete understanding.

It all comes down to trust, which brings us to why it’s important for a wildlife photographer to learn “bear talk.”

Once you learn the language of “bear talk,” you will understand what your subject is saying to you. It’s then up to you to respect your subjects wishes and act accordingly. When you do this, your subject will know that you understand and respect it. In turn, it will begin the journey of trusting you.

It’s a slow journey. It will take time. Whatever you do, don’t rush it.

Once trust has been established between you and your subject, you will be able to get those up-close and personal shots.

However when it happens, it is not a signal for you to move closer to your subject.

Instead, wait for your subject to come to you.

It will. Trust me. Animals are as curious about you, as you are about them. Perhaps, more so.

Typically, the approach will not be deliberate, direct, or up close.

However, it could happen. So be ready.

It has actually happened to me on numerous occasions.

Once in Denali, a Dall’s sheep ram walked within arm’s reach and looked up into my eyes. I’ve also experienced similar events with mountain goats on Mount Evans, near Denver. It’s not at all uncommon for wild horses to walk up and sniff my beard. 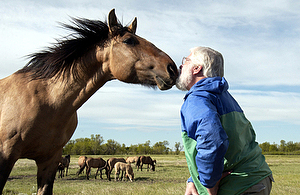 An example depicting the curiosity of wildlife . . . this time a wild horse from the Gila herd.

I still remember the time in Rocky Mountain National Park when two mule deer bucks came and laid down within seven feet of where I was standing. One of them actually laid his head on the ground and went to sleep. Not wanting to awaken him, I stood there almost an hour until he awoke.

More often than not grazing animals will continue grazing, moving closer and closer until they get as close as their comfort zone allows.

Several times, I’ve experienced brown bears actually going out of their way in order to get a closer look. Several years ago, a trio of yearling brownie cubs took a direction of travel that brought them within five feet of where I stood as mom looked on.

The good thing about trust – when it happens, magic happens.

The bad thing about trust – it can place our wild brothers and sisters in harm’s way.

When the fear of humans is removed, our wild relatives can sometimes be killed by hunters as evidenced by an incident that occurred in Colorado this past fall. A large bull moose was killed by a bow hunter.

It took place near a camp ground visited by hundreds of campers and photographers.

When we remove that fear, our wild brothers and sisters somethimes pay the price. When that happens, we are just as responsible for their death as is the person who pulls the trigger.

Perhaps, if the human race ever gets to the point where hunting is completely eliminated, this will no longer be an issue.

One person whose writings have had a major influence on my lifestyle, Henry David Thoreau, had this to say, “I have no doubt that it is a part of the destiny of the human race, in its gradual improvement, to leave off eating animals.”

Unfortunately, the problem is not limited to those individuals that hunt for food. There are some indiividuals who kill simply in order to hang a moose or deer head on the wall of their den.

The lives of our wild brothers and sisters is in our hands. The manner in which we use and distribute this knowledge will affect them. Let us use it wisely.

The more you learn about our wild borthers and sisters, the larger your vocabulary will become.

Whenever I duscuss a topic like this, my mind goes back to the time someone on the internet asked what was the most important thing to concider when photographing wildlife and I replied . . . know your subject. No sooner had I posted my comment when someone responded, saying I was wrong, and that it was more important to know your camera.

I agree that knowing one’s camera is extremely important when photographing wildlife, but all the camera knowledge in the world isn’t much use if you wind up in a pile of bear scat. 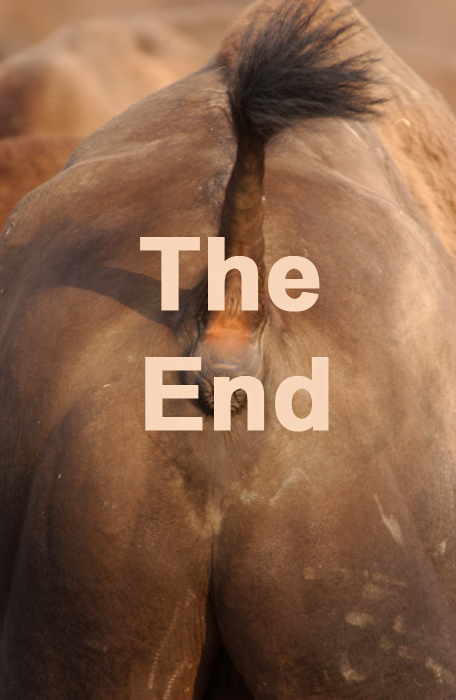 It doesn’t matter what he’s up too, as I mentioned earlier, you don’t want to be too close!